Each Boid team has a team bonus built in. This bonus requires no investment from the team leader, and is designed to provide a slight advantage to lower-performing teams. The team bonus is expressed as a simple earnings multiplier with a natural range between .1% (The team at the top of the leaderboard) to 1.5% (the team at the bottom of the leaderboard). When new users join Boid and needs to decide what team to join, the join team dialogue presents teams to them in the order of highest team bonus to lowest. Optionally, team leaders can opt to stake additional BOID tokens. These tokens act as a multiplier on top of the team bonus. 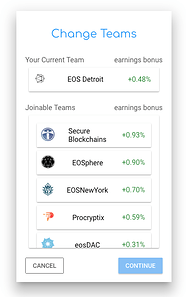 Every team gets a dynamic built-in bonus for each user on that team. If you want to increase your team bonus, you can stake more BOID tokens.

Boid Team Rewards is an optional (but highly recommended) system for team leaders to offer additional unique incentives to their team participants. Team Rewards are the primary way for a team leader to customize their team and get creative. Team leaders can issue new team rewards at the start of each season and during the season as well.

What do users need to achieve in order to be eligible for this reward? Ex. achieve a certain rank on the Team Boid Power leaderboard.

The specified criteria needs to be achieved by a user account that has been on the team for a specified amount of time. Users can change teams during the season (every two days), so to reward faithful users, you can disqualify team members that have not been on your team long enough. Common timeframe specifications might be one week or maybe even two months (the entire season). You could also make short term prizes that are exclusive for new users (to encourage users to change teams, or when onboarding new users directly from outside of Boid).

All Boid user accounts are sorted into five tiers based on a global assessment of their relative contribution to the network. The bottom 5% of accounts are sorted into Tier 0. Many of these accounts are either very new users or spam accounts with very low amounts of power. Tier 1 - 4 includes the majority of average participants, and Tier 5 is the top 10% of network contributors. You can define rewards that are targeted at specific user tiers, For example, you could target tiers 1 - 4 only, to attract normal active users who might have 1-3 computers linked to Boid. Or make an exclusive prize only for the Tier 5 users (server farms and mining operations).

Users who reach this criteria get some predefined reward. Currently the Boid platform supports three different types of rewards, and we are open to more ideas from team leaders. The digital rewards are distributed automatically by the Boid system based on the criteria defined by the team leader.