In Janurary we had a discussion and voted on changes to the BOID token-economics. As mentioned then, we have been working on some formulas to algorithmically adjust inflation in the future. This proposal is the first step to implement those formulas. We split the proposal into three different options. Please review the options provided and vote on the one you prefer.

Keep in mind that there will be a two month ramp up time during which these values will be adjusted. Once we have reached these goal values, the subsequent adjustments will be driven by the algorithm and will be less drastic.

Our emission aim is to reach 20B BOID in 30 years, which is an increase of 0.55% per month – roughly equal to 15.5M at time of writing. Currently, total emission is closer to 40M. Therefore, we need to adjust the network settings for power & stake difficulties. The last month situation is approximated as follows: 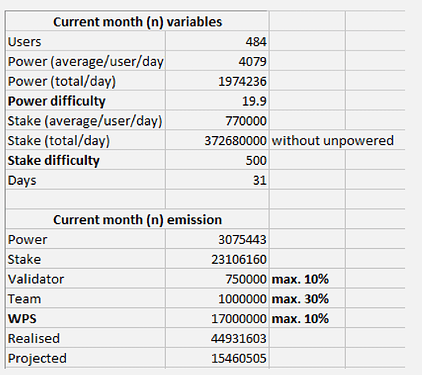 The proposed cap on WPF (mentioned as WPS) will reduce the emission by roughly 15M. At that point, the realized emission is still around double of what it should be. It is also worth mentioning the stake emission is nearly 8 times the power emission. Therefore, we have proposed three possible scenarios for the difficulty settings, after which the inflation formula will take over.

To reach the projected emission, we would adjust stake difficulty from 500 to 1275. This will also result in the stake emission to go down to ‘just’ 3 times the power emission.

Adjust both difficulties, keeping the ratio power/stake emission roughly as it is currently. 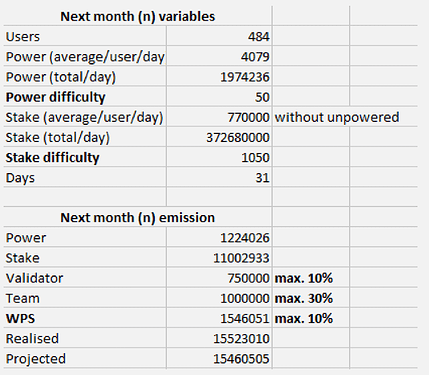 Here, we adjust power difficulty from 19.9 to 50 and stake difficulty from 500 to 1050. The ratio of power to stake emission is 9, which is just a bit higher than it is currently.

Adjust both difficulties, aiming for middle ground between proposal 1 & 2 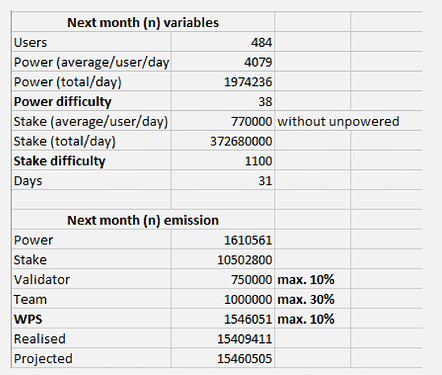 Here, we adjust power difficulty from 19.9 to 38 and stake difficulty from 500 to 1100. The ratio of power to stake emission is 6, which is right in the middle of the first two proposals.

Keep in mind that the percentage shares in these graphs (Validator, Team, WPS) are still likely to change, we are mostly focused on adjusting the total network inflation. Also these values will be adjusted in stages and not all at once.

Remember you can test out the values for yourself using the network simulator at stake.boid.com

To encourage participation in this poll, the Boid DAC will delegate 50k BOID stake to your account for voting and responding below with your thoughts and input. Be sure to include your EOS account and thanks for your participation.

The ratio between stake and power rewards seems too broad currently. Let’s bring them a bit closer together. I think that may encourage more power participation to help increase work for the scientific community and increase the number of users. My EOS account is touchman1313

The current staking weight is far too high in my opinion. It is not encouraging new users without any Boid tokens to start providing resources. The first step should not be to force new users to buy some Boid to be able to earn. The value users are providing are CPU/GPU resources and that should be what you are earning most of. You can have a gaming component with staking but that should not be such a big portion of your rewards. This is not sustainable to try to force users of the system to buy tokens to make anything from providing your resources.

Leave power difficulty as is. Raise it too high, too fast and users with less sophisticated PCs may drop out. EOS account: 1moneyteamgh

I think that the proposal 1 is the best one for people with not a super PC. EOS acc: salaeones333

Payout seems way less than before…Is this proposition active now ?
The prices to borrow on Chintai are way too high for me now

This change on tokenomics shouldn’t be activated before some delay of at least 30 days : I have borrowed a lot on chintai based on old tokenomics and now I will loose based on the new one ! That’s not fair.
" there will be a two month ramp up time during which these values will be adjusted" But you already up the stake difficulty by 50 % !!! Please take in account the whole problem now that your token is on Chintai with 30 days lease…

Totally agree with you @101

Some people may have chintai leases which are no longer profitable due to these changes. Since this is a special circumstance, you can DM me directly here or on telegram @boidcom and we will refund the difference.

Looks like I’ve been away too long and missed the vote. I had positioned my account to maximize payout buy buying a couple million tokens. I would have voted for prop 2.

I’d like to propose ranked choice voting in this situation. The majority of voters did not vote to adjust stake difficulty so drastically. I would suggest that given the choice between 1 and 2 or 1 and 3 we would have a different outcome.

Why don’t make it more smooth from 500 to 1275 in two months (it’s +13 per day during 60 days in linear) that was my comprehension when I vote, not something as basic and violent as +50% first day.
Another thing is 21 voters is so few regarding the number of users.

A msig with input from many people is required each time there is a change. This is the best we can do at this time.

Another thing is 21 voters is so few regarding the number of users.

Unfortunately, there are many users who just want to run the app and collect boid and don’t follow the telegram channel or other options for updates on what is going on within the community/app. We can only hope that community involvement grows larger as time goes on. Until then let’s keep those

Actually only 9 individual accounts decided the fate of the new path. From the looks of it most of those users combined own only a few million tokens. Cutting total emission is good for token value long term. Greatly reducing the value to hold, stake and lease is not.

This is the reason we asked for feedback and for users to propose their own ideas. We have been having conversations about inflation since June 2019 and have made many adjustments following the rules laid out. Ideally it would be great if the community was more proactive about proposing solutions to problems instead of only providing feedback after those changes have been discussed and implemented.

I understand, my fault for not paying attention for a while. I have no problem following the crowd, but I found a few problems with the way this was done.

The vote to drastically reduce staking rewards only benefits those that aren’t heavily invested in the platform/token in the first place.

Having three options splits the vote from those with the same mindset but have a slightly different opinion of how it should be implemented. This is the reason there are only 2 reliant political parties in the US.

Until a true DAC can be implemented I think you should take the communities recommendations into account and do what you think is in the best interests of the platform. Don’t just take a few percentage points of a vote with half of one percent of the token supply to completely change the way the token emission works.

Can we vote on this idea?

I created a network simulator at stake.boid.com click the “global sim” tab then you can test different variables and see how that impacts the network. The reason I created that UI is specifically to make it as easy as possible for anyone to propose variable adjustment values.

You should test out the sim and propose alternative values to the community and hold a vote. I’m not married to any of these numbers. I do like the idea of adjusting the variables more smoothly, so I’ve been thinking about a smart contract that would update the variables slightly each day until a target is reached.

Personally I voted for option 3

I voted option 2 after checking the numbers in the “Global sim” but it is what it is now…
Of course I support the idea of a smart contract that update the variables smoothly !
Better if we could start from 500 again.

Based on community feedback I have deployed an additional smart contract action to support the smooth adjustment of global parameters over time.

The actions are deployed on mainnet at boidcronjobs. The adjustment to be made is registered in the “adjustjobs” table, the table defines the start/end of the adjustment period and initial/goal values of the parameter being adjusted.

After a job is registered, any account can call the execadjjob specifying the adjustment job to be updated. Based on the configuration in the table, this will cause the global parameter to be adjusted according to a linear progression. The action can be called at a maximum interval of 10 minutes. When the target time has been reached, the target value will also be reached and the row for the job will be cleared.

This means you only have to rely on the DAC to register the initial parameters of the change to be made, then the gradual change over time can be performed by any account that wants to call the execadjjob action. The execadjjob action only has the ability to increment the value as configured by the DAC.

Fastest and most complete block explorer and wallet.

I registered a job which will adjust the stake difficulty to our target value gradually over the course of the next 30 days. Also this functionality will make it easier for us to implement more automated and algorithmic changes in the future.