This Article was originally written on Medium and I’m copying it here.

During the Boid community livestream on June 14th I announced my initial proposal for the year two economic plan for the Boid network. Based on community reception of the idea, I have fully fleshed out the economics for how the Boid network can work moving forward. Currently much of the functionality mentioned here is being tested in smart contracts on the Kylin testnet. We are aiming for elements of this plan to go live on EOS mainnet sometime in August. 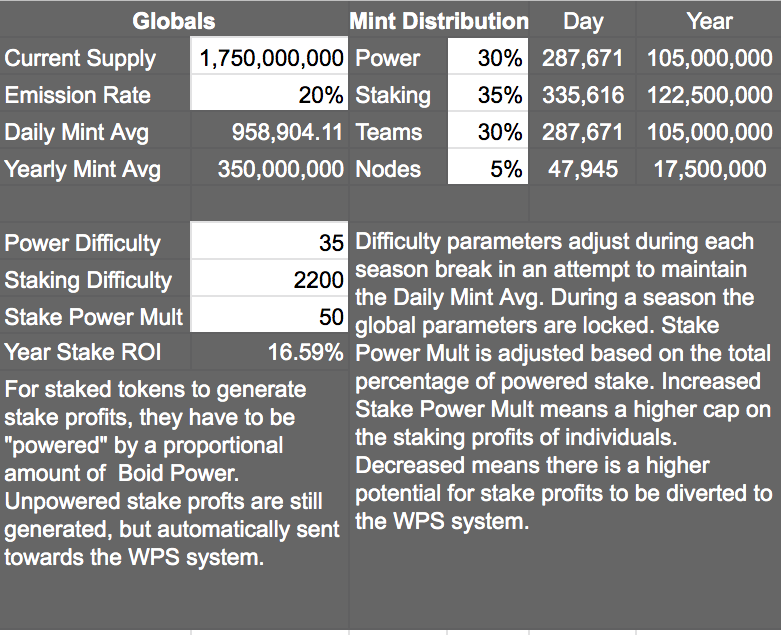 This is a request for feedback from the community before these changes are implemented. I have summarized the major ideas here, but view the linked documents at the bottom of this post for the full details.
Approximately 1.25B BOID tokens were airdropped in 2018 and around 400M have been distributed in the first year through mining and promotions. The vast majority of these post-airdrop tokens were distributed to end users who contribute computing resources. This represents an inflation rate of around 35%. While this rate of inflation is suitable for rewarding early adopters, it fails to reward contributions other than direct computing resources. A lack of incentives for users to run Validator nodes and teams prevents the network from growing to a decentralized network. Team leaders should feel like the time spent managing their team has a material benefit to them as well as the brand their team represents. Boid Validators will need to operate high-uptime servers which are critical for the scaling of the network.

For year two my proposal is to mint BOID tokens at a rate of around 1M BOID per day, which would bring the inflation rate to 20%. Additionally, instead of all tokens going to normal users, the tokens would be split between four major segments.

Mining rewards earned by users for contributing their computing resources to the network as determined by user generated Boid Power.

An additional payout on top of the power profit which takes into account staked BOID tokens and total Boid Power (PoweredStake vs UnpoweredStake).

Validators are users who run hardware with the Boid Node software to provide infrastructure support to run the Boid Network. In addition to running servers and API endpoints, Validators are responsible for reporting device contribution information to the blockchain. Data contributions from all Validator nodes are assessed by a smart contract and consensus is achieved initially based on a simple BFT algorithm. As the Validator program leaves the alpha stage, anyone will be able to run a node and a more resilient consensus algorithm will be implemented. Validators are rewarded for reporting information that eventually contributes to valid consensus.

Each Boid account is associated with a team. A team aggregates Boid Power from all team members and receives tokens from the portion of inflation rewards set aside for teams according to the relative performance of the team vs other teams. A built in mechanism enables generated tokens to be returned to Boid team members in the form of team bonus rewards and collected by the team leader as an administrative fee.

How these segments are divided up should evolve over time and is to be adjusted through governance and automated algorithms.

Validators (Nodes) require a minimum stake to be considered as a Validator. Additionally, there is a cap on the number of Validators that can actively contribute to consensus. Both of these global variables can be adjusted over time. Each Validator receives a Base Reward, which is half of the Node Rewards pool split evenly. Each Validator also receives a Stake Weighted payout, which splits half of the reward pool proportionally according to the stake of each Node relative to all BOID staked by Validators. Future revisions of the consensus protocol will reward Validators based on objective performance metrics and team association as well. Validators are normal Boid accounts, so the profits they earn from the Validator Rewards Pool stacks with the normal Stake/Power payouts. All Validators confirm all network contributions, and contribution with 2/3rds consensus becomes validated. Sharding of consensus in the future could enable less proportional redundancy for improved performance.

Teams generate a static Base reward as well as rewards relative to their performance vs other teams. 1/4th of the global Team Mint Distribution goes to the Base reward, split evenly among all teams (there could eventually be a cutoff for the top 50 teams for example). 1/4th is distributed proportionally according to the team relative powered stake. 1/4th is distributed proportionally according to the team relative power (however I think this should be based on rank instead). The remaining 1/4th is collected into an end of season prize pool which would be rewarded to the top performing teams based on their final end of season ranking. The team leader can dictate how the income of the team is divided. I have provided some categories here as an example. Team leaders will announce their team economics during the season break, and will be locked in for the duration of the season. This gives team leaders the flexibility to experiment with different types of incentives each season to find a good fit for their community. This system supplements and extends the existing team promotion system. This system is an upgrade/replacement for the existing “Team Bonus” payout that users currently receive.

Please view the linked document for examples and ideas of the types of projects the Boid WPS could help fund. If anyone from the community has the ability to take the lead on these ideas, we encourage you to share implementation details with the community and prepare an official proposal when the WPS system goes live later this year. The WPS fund is designed to help launch concepts but can not always be relied on for the continuous funding of live features. For that reason, I have included a basic monetization idea for each feature which would fund the long-term maintenance of the feature and help to make it self-sustaining.

While our initial vision for Boid was as a native sidechain that runs in parallel with EOS mainnet, this vision was based on proper native IBC tech which has not yet been developed. Over the past year we have seen mainnet resource costs drop exponentially while the performance of the chain has been improved several times as well. With second layer scaling solutions such as vRAM maturing, and the REX/Chintai market resource availability, scaling on mainnet continues to become more attractive. It is possible that Boid could become a standalone blockchain in the future, where Validators would become responsible for block production. I would only suggest this migration if costs became prohibitive to operate directly on mainnet and also native IBC was also implemented such that relevant data could easily be moved between chains seamlessly.

During the Boid alpha phase, Validator nodes will be invite only while we ensure the security and robustness of the consensus algorithm. For early adopters who want to be involved in Boid long term, are comfortable running reliable Linux servers, and are able to stake 20M BOID tokens, you can fill out this form and the Boid core team will follow up with you. Currently our plan is for the alpha Validator nodes to be live in August.
Apply for Validator Alpha here: https://forms.gle/Z4QxjCGfvenNTJ1m6

When the BOID token contract was created, I set aside tokens for advisors and the Boid core team. These tokens have not been touched since they were issued. As announced in June, we have decided all BOID tokens set aside for founders, and around 90% of other premined coins will be recycled. The remaining premined coins will be used as initial funding for the WPS pool. All users who want to make big contributions to building and scaling Boid will be able to be funded directly by the community in a decentralized way. Since the WPS pool will be automatically funded by unpowered BOID stake, the users on the network will have control over how much money goes into the pool in the future as well as how that money is spent.

We have implemented a recycle action into the token contract to be deployed this week. Recycle is the same as burning tokens except those recycled tokens could be re-issued through Mint/Mining rewards at the system level in the future instead of forever lowering the total supply of coins. While in the short-term, the end result of recycle vs burn is the same, recycle is a much better long term economic strategy for the network as a whole, and will ensure some base level inflation rewards that will encourage network contributions potentially forever as inflation reduces over time and utility functions of using the Boid network such as running computing tasks will require end users to recycle some coins as well as stake some.

Some pages have comments you can read for additional context
https://docs.google.com/spreadsheets/d/1jxpVtfenS14RtJdhY9HamFq3O6LdzvVvd_dRFRKfsJc