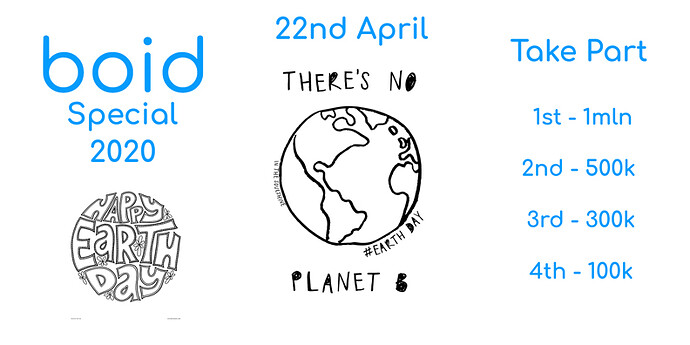 earthday792×396 106 KB
Hello Boid Community!
Earth Day is an annual event celebrated around the world on April 22 to demonstrate support for environmental protection.
First celebrated in 1970, it now includes events coordinated globally by the Earth Day Network in more than 193 countries.
This year we would like to demonstrate our support for environmental protection.
APRIL 22, 2020 MARKS 50 YEARS OF EARTH DAY.

To be able to be a part of Boid Yearly Special, users need to:

Random Boid users will be chosen from participants. The lottery will be done on 27th of April 2020 18:00 GMT.
Then after verification all the funds will be transferred to the winners.

Please go to https://learn.boid.com/#/sp-earthday2020 and check it out.

CHILL OUT
No place on Earth is colder today than it was 100 years ago.

False
Although most locations on the planet have recorded increased temperatures since 1900, changes in global ocean and atmospheric circulation patterns have created small-scale temperature decreases in a few local regions.

FULL OF HOT AIR
Which of the following gases does not trap heat?

B. Nitrogen
Heat-trapping greenhouse gases absorb and emit radiation within the thermal infrared range. Water vapor, carbon dioxide and methane are Earth’s most abundant greenhouse gases. Nitrogen, which makes up 80 percent of Earth’s atmosphere, is not a greenhouse gas. This is because its molecules, which contain two atoms of the same element (nitrogen), are unaffected by infrared light.

MUY CALIENTE
Where have some of the strongest and earliest impacts of global warming occurred?

B. In northern latitudes
Some of the fastest-warming regions on the planet include Alaska, Greenland and Siberia. These Arctic environments are highly sensitive to even small temperature increases, which can melt sea ice, ice sheets and permafrost, and lead to changes in Earth’s reflectance (“albedo”).

HOLD THE LINE
Compared to other greenhouse gases, carbon dioxide is the most effective at trapping heat near the Earth’s surface.

SMOG STORY
Some kinds of pollution in the atmosphere can act to cool the planet by reducing the amount of solar radiation that reaches Earth’s surface.

A. True
Air pollution can take the form of fine particles called “aerosols,” which both absorb and scatter the sun’s radiation. Both natural and man-made aerosols, such as dust, sea salt, soot and sulfates, affect the climate by reflecting radiation that is transmitted through the atmosphere.

DOG DAYS
Earth has been warmer in the past than it is today.

A. True
Global temperatures during some of the past interglacial periods have exceeded the average temperatures we observe today, although you would have to go back more than three million years to find a period that was clearly warmer than today. Temperatures in the most recent decade have now exceeded the warmth of the previous Eemian interglacial.

WARM AND COZY
If you removed the atmosphere’s natural greenhouse effect, and everything else stayed the same, Earth’s temperature would be:

D. 50 to 60°F (28 to 33°C) cooler
The greenhouse effect is a naturally occurring physical process that warms the Earth’s surface with energy from the atmosphere. Without the effect, Earth’s average surface temperature would be well below freezing.

WATCHING THE EARTH
How do scientists collect evidence about climate?

D. All of the above
For the past few decades, scientists have had the benefit of global satellite data. We have accurate ground-based measurements that reach back just over a century. “Proxy” methods, such as tree ring and ice core analysis, are used to reconstruct climate records before the rise of modern instruments.

BREATHE EASY
What are some forms of air pollution?

D. All of the above
Air pollution includes smoke, soot, carbon monoxide, sulfur dioxide, dust and anything that is unhealthy for life on Earth. Most of these pollutants result from burning biomass (biological material usually from plants) or fossil fuels (coal and gasoline).

OZONE
Is ozone good or bad for humans?

C. Both
Ozone is a gas made of three atoms of oxygen and occurs in both Earth’s upper atmosphere and at ground level. It can be good or bad for us depending on where it is found. When in or above the stratosphere (the higher atmosphere that ranges from 5 to 11 miles up), ozone forms a crucial sunscreen – the ozone layer – that protects us from the harmful ultraviolet rays of the sun. But ozone can also act as a pollutant at ground level, formed when pollution (say from cars) reacts with sunlight. A main ingredient of smog is ozone, which burns the lungs when breathed in and can trigger asthma attacks. NASA monitors the ozone layer and lower-level ozone using satellites and instruments on planes and on the ground.

WASH OUT
For how long do dust and soot generally remain in the air?

B. 10 days
On average, this is how long it takes for dust, soot and water-soluble chemicals to be washed out of the atmosphere by falling rain.

DIRTY AIR
Is air quality in the U.S. better or worse on average than it was 20 years ago?

A. Better
In the U.S., air quality is driven by six main pollutants: lead, carbon monoxide, ozone, sulfur dioxide, nitrogen oxides and particulates smaller than 2.5 microns. The good news is that concentrations of these pollutants have fallen over the past two decades, largely thanks to the 1990 Clean Air Act Amendments that reduced allowed industry emissions. Pollution reductions from mobile sources (for example, cars) have also been substantial.

SHARED SKY
How far can air pollution travel from its source?

D. Around the world
From space, we can see pollution moving across the oceans from one continent to another. For example, vast quantities of industrial aerosols (microscopic particles suspended in the atmosphere) and smoke from events such as wood or vegetation burning can travel from one side of the globe to another.

EXHAUSTED
What type of pollution is not pumped out directly from cars and trucks?

C. Ground-level ozone
Ground-level ozone (as opposed to ozone in the ozone layer high up in the atmosphere) is a pollutant that burns the lungs when inhaled. Ozone at the Earth’s surface is a main ingredient in smog but is not emitted directly from car exhausts. It is formed when pollution from vehicles, factories and other sources reacts in sunlight. Sunny California has the perfect conditions for unhealthy levels of ozone to form.

RIGHT TO THE SOURCE
What are sources of nitrogen dioxide?

E. All of the above
While nitrogen dioxide is produced naturally by lightning and bacterial processes involved in plant growth and decay, the strongest sources are man-made, from the burning of fossil fuels like coal and gas. From space we can see that nitrogen dioxide collects mainly around large cities and industrialized areas.

EYES ON THE SKIES
Which type of air pollution is most difficult to measure from space?

B. Ground-level ozone
NASA satellites have been measuring the amount of ozone in our atmosphere for over 30 years. However, since most of the ozone exists high in the stratosphere, it is difficult to measure ozone levels in the troposphere precisely, the layer of the atmosphere closest to the surface where we live and breathe. Pollutants in the troposphere measured by the Aura satellite include sulfur dioxide, nitrogen dioxide and some volatile organic compounds (such as formaldehyde).

NOW AND THEN
In the 10,000 years before the Industrial Revolution in 1751, carbon dioxide levels in the air rose by less than 10 percent. Since then they’ve risen by:

B. 46 percent
From 1751-2018, humans added approximately 800 billion tons of carbon to the atmosphere in the form of carbon dioxide. In 2018, 89 percent of all human-produced carbon dioxide originated from burning coal, natural gas, oil and gasoline.

DECADE IN SPACE
Which NASA satellite mission celebrated its 15th year of measuring the air we breathe from space on July 15, 2019?

A. Aura
NASA’s Aura mission was built to understand the chemistry of our atmosphere. The satellite’s measurements enable scientists to monitor some of the pollutants that are found in the air we breathe. Aura’s instruments also monitor gases high in the atmosphere and have helped provide a continuous record of ozone measurements essential for tracking changes in the ozone layer.

What is another name for “Scientists’ March on Washington”?

B. March for Science

These are the winners:

@I_Seth did an awesome job on this quiz and I thought it was very educational.

If you agree then please send him some coin as a thank you.

Fastest and most complete EOSIO block explorer and wallet.