Boid Season 2 ended on September 21st and we have some great statistics to share with the community about the performance of the Boid platform this season.

The science project we contribute towards (Mapping Cancer Markers) is currently studying ovarian cancer as well as sarcoma (bone cancer). The work is split into small work units which require 4-6 hours of computing time per unit to complete.

Development on the Boid platform has continued at a brisk pace. Here are a few highlights.

We were impressed with the speed and quality of the audit service performed by Somish labs. The majority of issues found during the audit were the result of utility functions which were only used during development and removed when the token contract was ready to be deployed. All major concerns contained in the audit report were resolved in subsequent code updates.

The new token contract deployed at boidcomtoken is a major upgrade over the previous contract. We detailed the token upgrade process in our post. As described in our previous boid economics request for feedback token inflation is being reduced and split among four different parties (power, powered stake, teams, validators). As an end user this means you will likely see a reduction in the amount of BOID that you earn for a certain amount of Boid Power. Depending on how team leaders decide to delegate team earnings, your team might have a higher impact on the profitability of running Boid in the future.

Deploying this new token contract live has been very challenging, but we are happy to report that all functions are now live and operating smoothly.

The new contract enables Chintai Integration, which is currently being tested on the testnet now. BOID will be one of the first tokens available on the new Chintai Exchange. You can read about the Chintai integration. 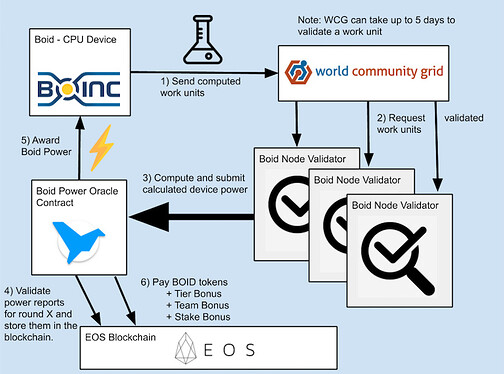 validatorschart.jpg835×620 130 KB
Boid Validators are independent community members that stake BOID tokens and run the Boid Validator software. The software collects data from various off-chain sources, parses that data and generates “Boid Power Reports” for each registered Boid device. These reports are generated independently by each validator every hour. The validators each send their reports to the power oracle contract which parses the data to generate a final Boid Power rating using a consensus algorithm. The Power Oracle contract then sends these final power ratings to the token contract where the cumulative power for each account is stored. Boid Power is dynamically recalculated by the smart contract using a decay formula.

2Klkas-iOjDOabL9UXHlOYrU_Rgs2Bp47NoGeZDWoO2aZU6sy5Z8A0kskPLvGVJ-CbHvq2erWbjJmowHXrXIjPLm_nK0Ypi--W-UO9X25wxTdnzH4NEKFMgJkvS84dBQaMmRk64h.png986×384 21.4 KB
This new decay formula is a breakthrough for scaling Boid Power because it reduces the computational load on the validators. While we designed this new formula to decay in a similar way to the current (Legacy) Boid Power implementation, users will notice a difference from the current implementation that can vary ± 35%.

Season 3 starts on October 21st. Because of the migration to the new token contract economics, It’s difficult for individuals to predict how much tokens they should stake for the new season and with Chintai coming online soon, there has been more people from outside the Boid community getting involved, causing additional confusion around how Boid season staking works.

The season stake-lock will not be enabled for season 3. That means that users will be able to freely stake/unstake during Boid Season 3. Based on community sentiment the stake-lock function may be used again in future seasons once the network token mechanics are more understandable by the majority of the Boid community. We hope this change helps to make the staking mechanics more friendly for new Boid users.

Currently users can generate additional Boid Power based on the power of users they invited. The system works as intended, but there are several issues with the implementation which need to be resolved before the system can scale.

Those are the reasons we are phasing out the existing social power system. We will still track user invites, but there won’t be any extra incentive attached to those invites for the time being. I added a community bounty for individuals that want to help develop a new social incentive system using smart contracts.

With the worker proposal system coming online soon, we have been experimenting with posting community token bounties in the Boid community site.

Take a look at the full list of available community bounties here:
https://community.boid.com/c/bounties

pEOS has Joined Boid and is led by @Fieldcommand Check out the team rewards.

The pEOS Boid Team for Season 3 [banner-01-1] Introducing the pEOS Boid team for season 3. Competing against many other EOS projects including Telos!! What is Boid, and why should you care? Often our computers sit idle, on, but not in use. The average person spends about 1.5 hours on a computer a day. What is your computer doing for the other 22.5 hours of the day? That is where Boid comes in. BOID is what has come to be known as a social supercomputer. BOID connects individuals to a massive …

Dave the leader of team Trybe has been proactive about getting some rewards for their team this season:

Trybe - A social learning platform for cryptocurrency and blockchain enthusiasts

Join our platform and start earning cryptocurrency rewards right now by sharing your knowledge and interacting with other users.

Some other teams have plans to offer rewards for Season 3 but haven’t made any public announcement yet. Make sure you follow up with your favorite team leader and encourage them to decide!